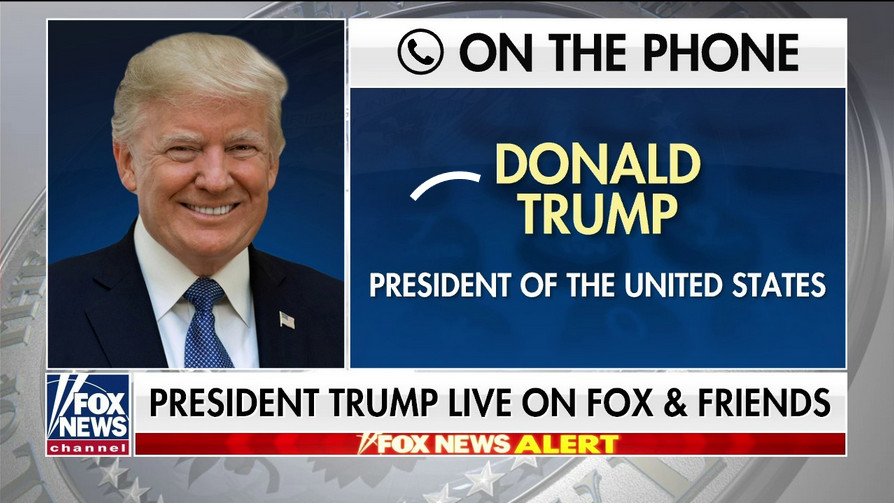 [See the video on Fox-New site:

President Trump: Russia probe wouldn’t have happened if Barr was first AG instead of Sessions]

President Trump, in an extensive interview Friday on “Fox & Friends,” tore into what he termed “dirty politicians” behind the Russia probe a day after transcripts were released showing that top Obama officials said they knew of no “direct” evidence of collusion involving the Trump campaign.

“It was a very dangerous situation what they did,” he said. “These are dirty politicians and dirty cops and some horrible people and hopefully they’re going to pay a big price in the not too distant future.”

It was a vague but ominous warning from the commander-in-chief, considering the history of the Russia probe is being reviewed to this day by U.S. Attorney John Durham.

Trump was specifically reacting to newly released transcripts of interviews from the House Intelligence Committee’s Russia investigation revealed top Obama officials acknowledged they knew of no “empirical evidence” of a conspiracy despite their concerns and suspicions,

The officials’ responses align with the results of former Special Counsel Robert Mueller’s investigation—which found no evidence of criminal coordination between the Trump campaign and Russia in 2016, while not reaching a determination on obstruction of justice.

The transcripts, which were released by House Intelligence Committee Chairman Adam Schiff, D-Calif., revealed top Obama officials were questioned over whether they had or had seen evidence of such collusion, coordination or conspiracy — the issue that drove the FBI’s initial case and later the special counsel probe.

“I never saw any direct empirical evidence that the Trump campaign or someone in it was plotting/conspiring with the Russians to meddle with the election,” former Director of National Intelligence James Clapper testified in 2017. “That’s not to say that there weren’t concerns about the evidence we were seeing, anecdotal evidence. … But I do not recall any instance where I had direct evidence.”

Trump used those revelations to double down on his assertion that the entire investigation was a politically motivated hoax.

“Well absolutely I think most people knew it from the beginning and they knew it was just a total hoax, a made-up story, a total disgrace to our nation. It made it impossible to deal with other countries, including Russia, because of what they were doing,”

Schiff published the files — approved in late 2018 for release by the committee — after facing pressure earlier this week from Republicans to do so. Acting Director of National Intelligence Richard Grenell then notified Schiff that the redaction and declassification process was complete, and that the records were ready to be made public.

Schiff, though, faulted the White House for the delay, accusing them of dragging their feet on the classification review.

And even as officials in those interviews said they didn’t have hard evidence of collusion, conspiracy or coordination, Schiff pointed to a variety of examples he described as “ample evidence of the corrupt interactions” between Trump associates and Russia.

Schiff said in a statement:

“The transcripts released today richly detail evidence of the Trump campaign’s efforts to invite, make use of, and cover up Russia’s help in the 2016 presidential election. Special Counsel Robert Mueller identified in his report similar, and even more extensive, evidence of improper links between individuals associated with the Trump campaign and the Russian government. A bipartisan Senate investigation also found that Russia sought to help the candidacy of Donald Trump in 2016.”

Trump on Friday didn’t hold back in his opinion of the California Democrat.

“So Schiff is a crooked politician, crooked as can be, one of the worst I’ve ever seen and I’ve seen some beauties,” he said. “He’s a liar, he’s a terrible person, he’s terrible for our country.”

“Guys like that end up going down,” he said. “They’re crooked and bad.”

The Justice Department also announced Thursday that it was withdrawing its case against former National Security Adviser Michael Flynn “after a considered review of all the facts and circumstances of this case, including newly discovered and disclosed information.”

In late 2017, Flynn pleaded guilty to making false statements during a White House interview with FBI agents. But his team has sought to withdraw his guilty plea, citing “egregious” FBI misconduct.

In filings, DOJ officials said they concluded that Flynn’s 2017 interview by the FBI was “untethered to, and unjustified by, the FBI’s counterintelligence investigation into Mr. Flynn” and that the interview was “conducted without any legitimate investigative basis.”

“Yesterday was a BIG day for Justice in the USA. Congratulations to General Flynn, and many others. I do believe there is MUCH more to come! Dirty Cops and Crooked Politicians do not go well together!” Trump tweeted Friday morning.

He said on “Fox & Friends” that there’s still “more to come,” hinting that more files may be related both to former President Barack Obama and former Vice President Joe Biden’s role.

Democrats overnight slammed Attorney General Bill Barr for the DOJ decision on Flynn, even calling for a new inspector general investigation. But Trump on Friday praised Barr as an official of “unbelievable credibility and courage.”

Trump also weighed in on the ongoing coronavirus crisis, particularly new unemployment numbers that show that the unemployment rate soared to 14.7 percent, saying that it was “fully expected.”

“It’s fully expected, there’s no surprise, everybody knows that. Somebody said ‘Oh look at this’ but even the Democrats aren’t blaming me for that, but what I can do is bring it back,” he said.

“They are like a puppet for China, everything China does is OK…they got $38 million from China, they get $450 million from us,” he said. “What World Health got away with is unbelievable.”

He said it was “right” to close down large parts of the country to save lives from the pandemic, but was optimistic for the future once the economy eventually opens up again.

“We had the greatest economy in the history of the world… and we artificially closed it,” he said. “Those jobs will all be back and they’ll be back very soon and next year we’re going to have a phenomenal year.”

The Associated Press contributed to this report.